The following is stolen in its entirety from a letter to the editor of Dialogue:  A Journal of Mormon Thought (Winter 1989).  It was written by Robert Nelson Jr. 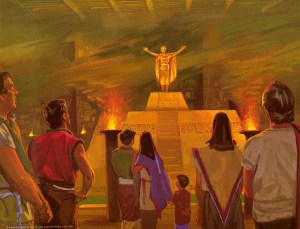 Illustrator’s Conception of the Book of Mormon Rameumpton

“Well, the Book of Mormon says it was a place where the Zoramites stood to worship and pray.”

“But my Primary teacher said it was a tower that evil people used.”

“I can see how someone could think that.  The Book of Mormon says it was ‘a place for standing which was high above the head’ and only one person could stand there.”

“A speaker’s stand?  You mean a pulpit?  Yes, I suppose it was.  In fact the word ‘Rameumpton’ means ‘the holy stand.'”

“What’s so evil about a holy stand, Daddy?”

“Well, it wasn’t the stand that was evil.  It was how it was used.  The people gathered there in their synagogue . . .”

“Just a different word for chapel or church, honey?”

“They’d gather in their synagague one day a week.”

“It must have been Sunday.”

“Because Sunday is the Lord’s day.”

“Well, maybe it was. . .  Anyway they’d gather there and whoever wanted to worship would go and stand on the top of the Rameumpton.”

“Could anyone go up there?”

“Well, no, that was part of the problem.  Apparently they had to wear the right clothes . . .”

“You mean like us when we wear our Sunday clothes, Daddy?”

“Well, not exactly but in a way yes, I suppose.  Some of us might have a hard time accepting certain kinds of clothes or people in sacrament meeting.  But we wear our Sunday clothes to help us be reverent don’t we?”

“Yes, they’d do up and worship God by thanking him for making them so special.”

“Were they bearing their testimonies?”

“Well, uh, I guess maybe they were in a way, but they weren’t true testimonies.”

“Because they were too proud?”

“Well, they would talk aabout how they were ‘a chosen and holy people.'”

“My Primary teach said Mormons are the chosen people and we’re a special generation.”

“Besides, they were very, very proud about how much better they were than everybody else because they didn’t believe the ‘foolish traditions’ of their neighbors.”

“What does that mean, Daddy?”

“It means that they believed everyone else was wrong and they alone were right.”

“Isn’t that what we believe?”

“Because we are right, honey.”

“Everyone would stand and say the same thing . . .”

“Then after it was all over they would go home and never speak about God until the next day of the Lord when they’d gather at the holy stand again.”

“No honey. we have Family Home Evening.”

To learn more about the Rameumptom, read the Book of Mormon, Alma 31.

According to the Book of Mormon, a Rameumptom is a high tower or stand from which the apostate Zoramites gave a pre-determined, vain prayer.  The practice of preaching from a Rameumptom was viewed by several Book of Mormon characters (including Alma the Younger and his companions) as sinful.  Based on this passage in the Book of Mormon, the term “Rameumptom” has come to have a metaphoric meaning in Mormon culture, signifying self aggrandizement or hubris.

This entry was posted in mormonism, Religion. Bookmark the permalink.

9 Responses to What’s a Rameumpton, Daddy?