Sign at an Orem food mart/gas station during virus quarantine:

Hiking with My Grandkids (and Their Parents)

Two weekends ago (March 2020), we were in Zion National Park celebrating my mother’s 100 birthday.  (Boy have things changed)  While there, all but one of my grandchildren (the absentee was on a mission in Chuuk, Micronesia; boy have things changed.), their parents and I hiked up to Upper Emerald Pool.  It was a beautiful day, and a fun hike.  At the middle pool, we stopped for photographs.

Ten of My Grandchildren and me at Middle Emerald Pool

Last weekend, my son Michael, his three daughters, and I hiked up to Paul Bunyan’s Wood Pile in Juab County, near Little Sahara.  It was another beautiful day, and a fun hike.

Probably our last hike for a while.

On a recent trip to Rwenzori Mountain region of Uganda, we visited 5 very primitive primary schools.  Three were located in the mountains above Kyarumba, the other 2 off the highway between Fort Portal and Kasese.

My Uganda colleague wanted to visit Buena Vista, a resort south of Fort Portal.  The resort, owned and operated by an Italian, is like a small piece of Europe transplanted to Uganda.  It was devoid of customers.  But the staff was friendly.  We ordered a pizza and drinks.  The resort is beautifully sited above a crater lake.  After our lunch, we asked if there were any primary schools in the area.  One of the employees offered to take us to a couple.  Both were very primitive.  (The schools stand in sharp contrast to the Italian resort.)  We told the school staff we would provide some supplies if they would provide the labor.  We returned with building supplies (metal roofing sheets, lumber, and nails) and desks, the latter made by a wood-shop training center in Kyarumba.

Interior of School, with Mats to Separate Classrooms

Unloading Supplies for One of the Primary School between Fort Portal and Kasese, Uganda

We also took boda-bodas (motorcycle taxis) up into the Rwenzori Mountains to visit 3 schools.  All primitive, in need of serious help.  We agreed to assist with supplies including a water storage tank, wood for siding, and metal roofing.  We also supplied soccer balls.

Because of the lack of a vehicular road, the parents of the students came down out mountains and carried the provided supplies by foot up to the schools.  Not an easy task.  It demonstrated to us the deep commitment of the villagers to the education of their children.  It was very gratifying to see their efforts.  At least 30 parents participated.

Primitive School Located High in the Rwenzori Mtns above Kyarumba

Unloading the Truck in Preparation for Hauling

Hauling the Water Tank on Foot Up into the Rwenzori Mountains

Carrying the Metal Roofing Sheets  Balanced on their Heads

In February (2020), staff of Playgrounds Everywhere installed a 4-piece playground at City View Nursery and Primary School, Mbale, Uganda.  The school staff assisted with the installation.

The Week that Was; Wow

Last Friday, we headed to Springdale and Zion National Park.  Despite the COVID-19 threat, we decided to go ahead with our mother’s 100th birthday party to be held at Zion’s lodge.  Forty invitees indicated that they were still planning on attending.

The drive down was interesting; it rained off and on the whole way from Orem to Springdale.  There my wife and I joined my brothers, spouses, and other relatives for dinner.  It was great catching up on family news.  One brother lives in Chicago, his son is getting a PhD at MIT.  The other brother lives in Maryland, his children live close by.

The next morning, some family members went on an easy hike to the mouth of the Narrows.  To get to the trail head, we had to take the shuttle.  The Virgin River was running high, so we couldn’t go higher even if we wanted to.  After the hike, we all took a break.

Meanwhile, according to the news, Rudy Gobert of the Utah Jazz was diagnosed with the virus.  All NBA games were almost immediately suspended.  As were MLB preseason and NHL games.  When I went to a Sports Grill in Springdale, there were no sports to watch.  But the chili was good.

The birthday party was catered by the lodge staff.  Forty-three people attended.  All three sons and spouses, all grandchildren (and spouses), except one, and 11 grandchildren (the 12th was on a Mormon mission in Chuuk, Micronesia).  A sister-in-law, four nephews and nieces also attended, as did my mother’s caregivers.  There was a humorous skit, tributes to our mother, etc.  Photographs were taken.  Mother posed with a wide variety of group permutations.  It turned out to be a fun evening.  (It was planned by my brother Ted.)

Mother is in a Dark Dress in the Center Right

The next morning, my entire immediate family hiked up to the Upper Emerald Pool.  It was a beautiful day and a fun hike.  The grandchildren did well.  After lunch at the lodge, we all split up.  Some stayed in Saint George, some stayed in Cedar City and on Monday planned to ski at Brian Head, the rest returned to the Wasatch Front.

On Monday, all hell started to break loose.  The shuttle at Zion NP was discontinued because of virus.  On Tuesday, it was decided to close all restaurants in UT, takeout is still okay.  Meetings of more than ten were to be discontinued.  By Wednesday there were 63 confirmed cases of the virus.

On Tuesday, we found out that our grandson was being evacuated from Chuuk (a state in Micronesia).  Once arriving in the US, he was to self-sequester for 2 weeks.  And then who knows what?

On Wednesday, there was a 5.7 earthquake in Salt Lake County.  The epicenter was near Magna.  In Orem, it made hour hanging door rattle.  And Brian Head closed for the season.

By Thursday, the virus victim numbers had risen to over 100.  There is talk of the Last Days.  But not by me.  My wife and I are largely staying a home, and catching up on work.  Mom is doing well.  So far, so good.

This is the crazy week that was.  The immediate future is a blur.

The LDS Church Needs to Do More, Much More

The LDS Church has been on the defensive about it’s humanitarian assistance ever since it was recently reported that it has $100 billion in one of it’s rainy-day funds. In a subsequent news release, LDS Charities announced that it had accomplished the following in 2019:

Latter-day Saint Charities carried out its vision to care for those in need, promote volunteerism and inspire self-reliance in a variety of ways:

Since the organization’s inception in 1972, Latter-day Saint Charities has provided over $2.3 billion worth of assistance in 197 countries. 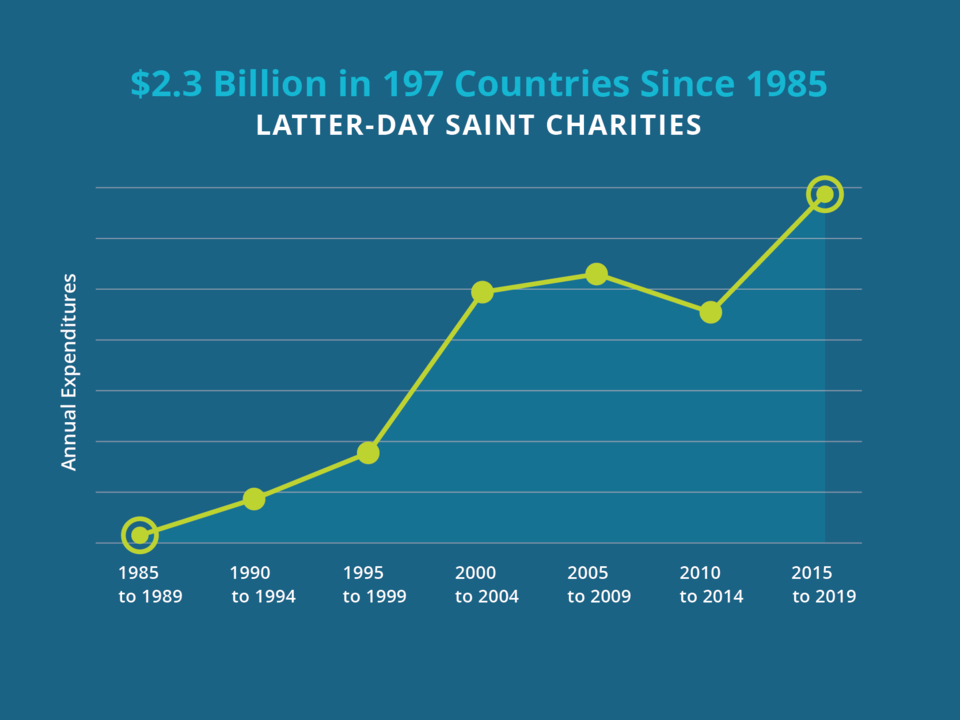 The news release goes on to further justify the Church’s actions:

These funds represent only a small part of the Church’s combined annual humanitarian and welfare aid expenditures (approaching $1 billion a year). These expenditures also include significant use of the faith’s fast offering fund, which local bishops use to help the poorest members of their congregations.

This report was probably made in an attempt to be transparent. But the members deserve more and better information, much more. We need a full financial accounting. And a much larger financial commitment.

President Nelson in last Fall’s General Conference bragged that the Church has contributed $2.3 billion in humanitarian aid since 1972. Unfortunately, compared to the Church’s vast resources, that is a small amount. Let’s spend at least $2.3 billion annually (exclusive of fast offerings and other Church welfare programs).

Where will the money for an enhanced humanitarian effort? Interest on investments. Tithing. Emphasis on the living, coupled with a deemphasis on work for the dead. Individual contributions. Missionaries, both young and old, doing much more community service, particularly in developing countries.

Adding to Existing Playgrounds in Uganda

At Queen of Peace Primary School in Mbale we added 2 more swing seats.  For these, we used just one hanger and suspended a wheelbarrel tire using chain.  The children either sit on the tire (by straddling the chain) or stand on the tire.  Additionally, we added one seat to an existing frame and left 4 tether balls.  QofP now has 17 swing seats and one swivel tire swing.

At the Jewish school in Mbale, we added 2 more seats to one of our existing frames.  We also added a seat to a narrow preexisting frame.  Additionally, we installed a tether-ball pole and left 2 tether balls.  The school now has 13 swing seats.

In the Kyarumba area, we had 2 sets of monkey bars made.  One was installed at KSA Primary School.  The other was donated to a primitive school located in the mountains above Kyarumba.  There are no roads to the latter school.  Everything must be carried by motorcycle (boda-boda) or by hand.

Getting Prepared to Hand Carry the Monkey Bars into the Mountains

In the Masaka area we found an interesting version of a monkey bar set.  It was shaped like a giant “M” with rounded corners.  We donated it to Byana Mary Hill orphanage school, located a few miles from Masaka.  We also replaced 2 of school’s swing seats.

While in Masaka, we donated 4 soccer and net balls to Liz Primary School.  The school staff and volunteers had constructed a sand box around their playground equipment that had been previously installed.

The co-director at Liz gave me a thank you letter:

Our pupils now are using their leisure time well especially during break and lunch time.  They [playground equipment] make them busy and active throughout the day hence improving on their health because of the continuous exercise they do using the swings.

He goes on to state that the playground equipment “creates interest for them [students] to be at school.”